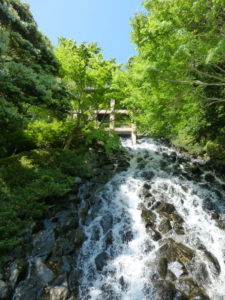 If you know well about Kyoto, or you are interested in Japanese temples, you might have heard “Kiyomizu temple(tera)” in Kyoto. It’s a great temple on the cliff, surrounded by green. And we, here in Shizuoka, have this in the pic. What is this? It’s called Kiyomizu san park. I think, it’s named after “Kiyomizu dera” in Kyoto. There’s a deck on the cliff just like the one in Kyoto. from the deck, you can see a city scape of Shizuoka city. And underneath of it, water is running like a big waterfall. It’s connected to the mountain back there, so you can hike up the mountain if you want to.

It’s a quite big park. Kids are running around, there are free parking space along the street, it’s a nice place. 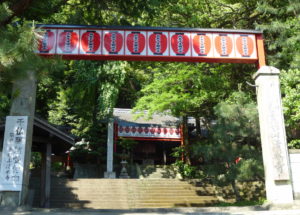 Next to this park, there’s actually a temple called “Kiyomizu dera“!! The principle image is “Senjyu Kannon”(the Buddhist Goddess of Mercy with a 1,000 arms!) There are not many shrines or temples that have Senjyu Kannon around here.

And this”Kiyomizu dera” is also one of the registered tangible cultural properties. They have summer festivals in July. So that might be a great timing when you should visit there! Since there’s a big park next to it, there are going to be many food stalls.