I’m sure many of you know those shopping places like Aeon and Ito Yokado. In Japan, we call those stores, GMSs. General Merchandize Stores. GMSs usually carry all kinds of stuff. So if you go there, you’ll find most of the stuff, like clothes, toys, books, groceries, flowers, dishes, alcohol, restaurants…and basically anything! They target family customers, so anyone can enjoy shopping and you will find almost everything there!

I’m sure most of you know “Ito Yokado“. (sorry, the pic is not really pretty. it was cloudy…) The owner of the chain runs Seven-eleven stores as well.”Ito Yokado” is one of the originator of GMS. And I believe it’s the oldest GMS in Shizuoka. 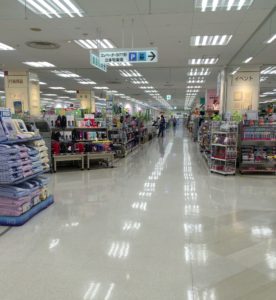 This “Ito Yokado” in Shizuoka has been loved by people in town. In this “Ito Yokado“, they have some tenant shops inside. They have 100 yen shop, Daiso, Sundrug, Akachan honpo, and even haircut place! They have little amusement, so you can take your kids with you. This might be a good place not only to shop for you but also to see how Japanese people usually shop in their daily lives. 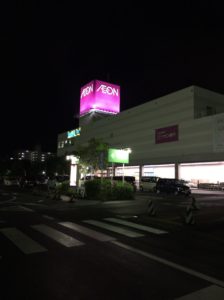 Once again, I’m sure that most of you probably know AEON as well. Sorry, the pic’s taken at night. Since they’re open till 11pm, I sometimes stop by during the night time. It’s fun because there are less people than during the day time. Yes, AEON is such a popular store, so usually they tend to be crowded especially on weekends.

Surprisingly, AEON is the largest retailer in Asia, according to the wikipedia page. Their group is huge. And this store is big, too. It’s fun to just look around the store. This  AEON is located in Shimizu area, and there are some grocery stores called “Max Value” all over in Shizuoka. 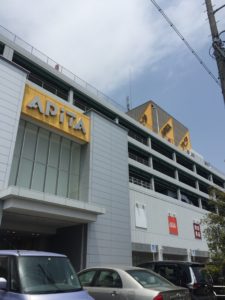 APITA is also one of the popular GMS stores in Japan. They used to be called “Uni”, but now they have a new name. “Uni” is still the group owner’s name, and they run the convenience stores called “Thanks” and “Circle K”.

At APITA Shizuoka, they have “Mujirushi store“, “G.U.” (subsidiary company of Uniqlo), McDonald’s, in case you miss the fast food, and whole lot more. Oh, they have a “Uogashi Sushi” restaurant here, too! And this one is “Sushi-go-around” type of restaurant. It’s not far from JR Shizuoka station. If you go down the street from the station to the south, then you’ll eventually find it on your left. 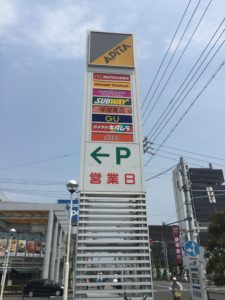