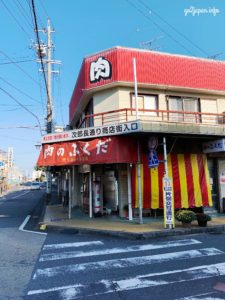 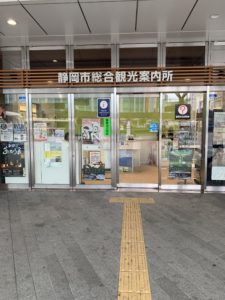 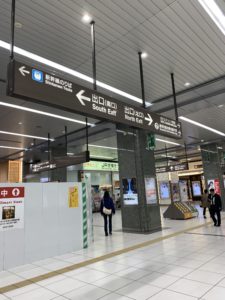 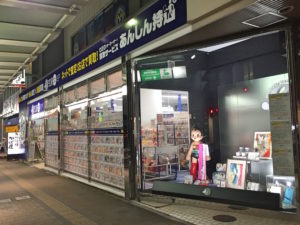 As I mentioned on the other page, Shizuoka is famous for hobby stuff including plastic models. And there’s a hobby store right in front of JR Shizuoka station, called “Surugaya”. They carry all kinds of interesting stuff, like Manga, books, managines, video games, anime cards, charactor figures and many more. As you can see in this pic, they have a big “Atomu” figure in the show case.

They are all second handed stuff, so people sell interesting or rare stuff to them, and they re sell them there. Even though they don’t sell brand new stuff, there should be something you might be looking for! 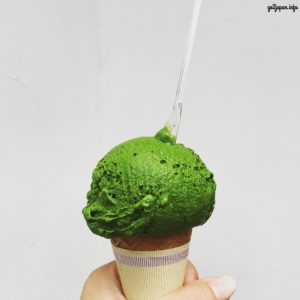 You’d probably find some Green tea flavored ice cream in where you live now. But, is that real Green tea? It’s called “Maccha” in Japanese. Remember that Green tea is one of the Shizuoka’s specialties and here at NANAYA, they use our specialty, the “REAL MACCHA”. And NANAYA has the “strongest Maccha” in the world, according to the sign that is set at the store.

They have 7 different kinds of Maccha ice cream, in strength. The number goes up, the Maccha flavor gets stronger. You can see the differences in colors as well. The strongest Maccha ice cream actually cost a bit more than others. The pic on the left is No.6. It really does have real, strong, Maccha flavor. 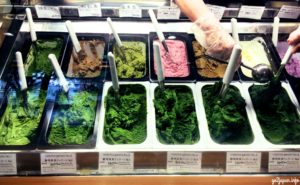 It is not artificial flavor. I’d like you to try Japanese, Shizuoka’s real Maccha ice cream and compare with the one you have tasted in where you live. Maccha is bitter, but these ice cream isn’t just bitter, it’s also got rich ice cream flavor as well! NANAYA also sells some real green tea products at the store. 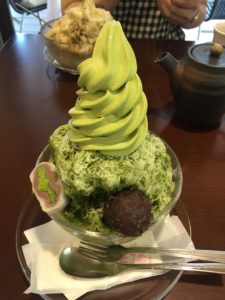 GASHO AN is also run by a green tea company, Oyaizu shoten. So they serve and use real green tea for the products. GASHO AN is a cafe and store that sells sweets using green tea. Some people buy those sweets as gifts. I’m sure that you’ll find some nice gifts for your family or friends back home. Also the cafe is really nice. They serve green tea/tea sweets and foods there. It’s interesting that they have “green tea pasta”. Why don’t you try it? I tried some of their sweets.

During the summer time, they serve “Kakigori”, shaved ice. It was a tall parfait looking Kakigori. It has some “Maccha” green tea ice cream on top of the Kakigori, a little ball of “Anko”, red sweet bean paste, and their original “Mochi” sweets called “Marifuku”. Well, it was really really good!! If you love “Maccha” and sweet stuff, then why don’t you try this. 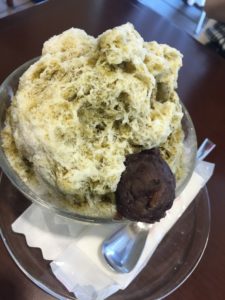 Also their “Houjicha Kakigori” was really good. Hojicha is roasted green tea, so it has full of roasting aroma. And very refreshing! This one also has a little ball of “Anko”. They also have green tea parfait and lots more of sweets and foods. Do check out their website.(link down below)
You might have to be in a line over the weekends since this place is very popular in Shizuoka. 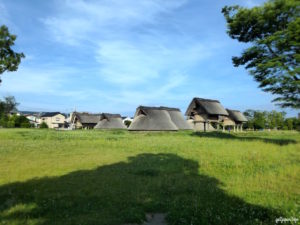 “Izakaya” is a type of casual restaurant where people go to eat and drink. It’s the one you go when you feel like drinking mostly. Their foods are relatively reasonable in general. Some places offer “all-you-can-drink (or eat)” menus at a reasonable price. But if you go to a nice Izakaya, it might not be the same. There are so many chain Izakaya restaurants all around! 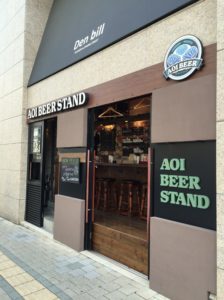 This is not a “Izakaya” type of place. (if any of you from Aoi beer is reading this post, no offense! I just wanted to introduce you as one of Shizuoka’s popular beer place!!) But it’s a stylish and new type of beer stand.

“Aoi Beer” is Shizuoka’s local brand craft beer brewed at their own brewery, Aoi Brewing, which is the first brewery in Shizuoka city opened in 2014. And Aoi Beer Stand the standing bar run by them. The basis of their logo design is the family crest of Ieyasu Tokugawa who had chosen Shizuoka as his retreat after retirement of a general.

They have several different kinds of craft beer, pale, golden, Stout, Weizen and so on. They also sometime serve limited time kind.

So, their beer is only available in Shizuoka. Aoi Beer Stand is actually packed with people even on weekdays. There aren’t many space there, but make sure you grab a glass or two before you leave. This is something you can drink only in Shizuoka!! It’s located quite close from JR Shizuoka station.

Sakura with the stonewall background.

Another wooden gate after the first.

The first thing you’ll see after entering the first gate.

Once you enter the gates, you’ll see their territory.

It’s just so amazing we still have those stone walls after 400 year.

See how big it used to be.

The outer moat of Sunpu castle.

Let’s walk through the gate!

A stone monument that that tell you this bridge was belonged to Sunpu Castle.

Look, how tall the stonewalls are.

Sunset after the rain is my favorite time.

A hazy Mt.Fuji is still an art.

It’s seen from Route 1, right next to Mark Is.

One of the best places to see it.

Look at it closer, you’ll see a couple of guardians there.

This path leads you to the main building, Hondo.

Inside of the city hall of Shizuoka.

You can see the stone walls through it.

Drive way of the old city hall of Shizuoka.

See how narrow it is. This tells us Japanese cars back then were smaller than the ones we have now.

What a classic view.

Looks pretty over the stone walls from 400 years ago.

It is just beautiful.

It’s located on the corner.

This Shizuoka bank is also a tangible cultural property.

This sign is also written from left to right.

If you are shopping, it’s always better to shop at low-price. However, you still want the stuffs to be good value. Then try to shop at those Discount stores! We have some Discount Stores who carry stuffs from commodities to groceries! Spend less, and shop more! 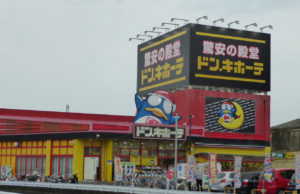 As most of you have heard of a discount store called “Don Quixote”. This is one of the hottest shopping place for international tourists. One of the reasons for that could be they are duty-free store!

Inside of the store is like a maze. It doesn’t mean you get lost, but you get to find so many stuffs that catch your interests as you walk through the aisles.

There is usually a Yakitori (chicken skewers) truck waiting outside at the Don Quixote in Shizuoka. That’s your first attraction (if you’re hungry). Then bicycles are very useful in Shizuoka area, so there are so many of them lining up and welcoming you at the entrance.

They would probably have everything you need. Make up stuff, clothes, electronics, video games, snacks, foods, drinks, car supplies…and what else? To find out what they really have, please actually visit one of the Don Quixote stores in Shizuoka! (lol) We have three of them.The map below is the one in our downtown area. The newest store is in the place called Yamazaki.